The field season has officially started in Northern NH!

Male Common Yellowthroat warbler (COYE):   This fellow is defending a small territory in a patch of open thicket.   These warblers rely on early succession forest- patches of substrate that haven’t  really grown in yet- to build cryptic, ground-level nests.  They develop complex systems to divert/confuse predators away from their nests.

Female Black-throated Blue Warbler (BTBW):  I was lucky to see this female.   She is paired with a male who defends a large mature forest territory.   They have quite a few BTBW neighbors, which makes for a lot of skirmishes among the males over land.  The females are often silent and move very fast…

Male Mourning Warbler (MOWA):  This is a rare bird here.   Even more amazing, it is defending a territory in our research site- and trying to chase out a male COYE while doing so.  The two species “share” resources, which means thy can’t stand each other.   🙂   Each time the male COYE sings near the MOWA, it gets berated and chased away- and vice versa.   It appears the COYE isn’t budging either, probably because it hasn’t had this domestic, neighborly problem before.

While somewhat of a historical entry: (repost)

Myself and my father contributed 64 species, including the below Rose-breasted Grosbeak, Female Northern waterthrush, Common Yellowthroat warbler, and  Northern Parula. 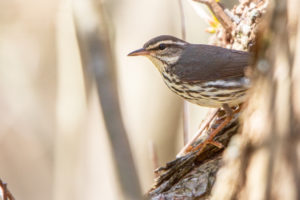 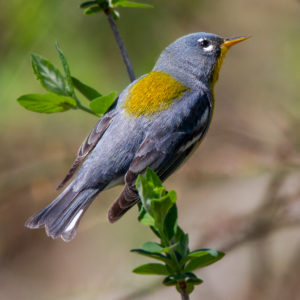